“Primitive Skills” has built a Primitive hydraulic machine called “Monjolo” to pound rice. In my idea of ​​reaching a more advanced food treatment in ancient primitive times, my experiments involved creating a “Monjolo” made of natural wood and bamboo according to “Primitive Skills“. I started by going to the forest to search for materials, including a large piece of wood and pieces of wood needed to make it. The tool I brought was a primitive ax that I had molded myself in previous “videos“.

I chose a piece of wood to ensure the straightness, firmness, and durability that I used the ax tightly before. This piece of wood was so big, I couldn’t even hold it, so I couldn’t bring it home. I decided to use the ax I made earlier to perform the pruning of the log right here in the smallest and lightest way to easily carry it away. Start the trimming job so that one end has a water trough and the other end is smaller to tuck the pestle. Because the wood is very solid, pruning is not easy, I have to do it until after dark I have finished.

The next morning, I chose a piece of wild, tough, firm and long enough string in the forest to drag it home.

After returning home, I started burning fire to collect coal to make holes. While waiting for the charcoal to burn, I chose a hard, straight log about the size of my wrist and a meter long. Make a horizontal hole right next to the trough to install the spindle. Grab some dirt around where I need to make a hole, put the pieces of coal I just burned inside, use a small bamboo tube to blow the “Primitive skills” to burn red hot coal into the hole. The second hole is located near the other end, carved from the top to insert the pestle, performing the same step as the first hole. So the end of the second day.

The next morning I fitted the shaft and pestle.Choose the connection between two bamboo sections right next to the house, disconnect the water to make a place for “Monjolo”. Use a stick to dig two holes side by side, bury two supportive piles. take wooden pieces and support stones at one end and then erect the main girder, after finishing the installation, remove them and compress the soil around the two supporting piles to ensure. Next, dig the soil around the knockout position to build a mortar, dig the soil around the water trough to create depth when the trough pours water, paving the way for water to flow into the ditch.

After completing the preliminary section, I adjusted the water pipes, and put the bamboo piles to make sure.fix the water and get it flowing into the trough to check, but unfortunately my machine is not working. I find that the reason for this is because the shaft hole is too chiseled in the direction of the trough, so when the water is full, the trough is still not heavy enough to lift the other end. I fixed it by adding stones to the trough to increase the weight of the trough, eventually succeeding.

(The pump is operating)

Every 10 seconds, the machine performs one beating, an average of 8640 times a day, too convenient for pounding rice to serve the life of the “Primitive Skills“.

Currently, I have only completed 60% of the “Monjolo” project of “Primitive Skills“. The next job is to build a roof to cover the rice basket, so that the rice will not get wet when it rains. I continued to go into the forest to take more than 10 palm trees, 4 wooden trees, about the size of my wrist, to make columns and 4 bamboo to build the roof of “Monjilo“.

First measure two equal wooden columns, the other two are lower than the previous two to create an inclination of the roof about 30 degrees, inserting the measuring poles in turn. Take a piece of stick to measure the distance between two adjacent columns horizontally so that the edges are about 15cm apart. Based on the newly measured size to cut 3 pieces of bamboo, use 2 parts as a horizontal bar, the rest to divide into 5 pieces. Next, cut 5 more small pieces of bamboo to place vertically, the distance of each piece is about 25cm, take a lanyard to ensure and then take 5 new pieces of cup to put horizontally with the distance of each piece about 30cm and Links. Take palm leaves to form a roof like in the “video“.

Therefore, “primitive skills” have completed the production project “Monjolo” (primitive hydraulic machine). And now it’s time to enjoy it. Get a piece of wood long enough to support the tip of the pestle and put enough rice to serve my day in the mortar to pound the rice. While waiting for the rice to be pounded, I went to the forest to look for bamboo pipes to cook rice.

(Rice is being processed after pounding)

Wait until the paddy is completely peeled, unload it into the “Sieve” and proceed to sieve the rice until the husk is removed, inspect and pick up the remaining paddy. Rinse the bamboo tube, add rice and wash 3 to 4 times with water and soak there.

Now go get some food. Use bamboo as in the “video“, then bring the basket to the pond to catch fish. After about 30 minutes of catching fish according to the “primitive skills“, choose the largest one to clean and then take it to grill. Check soaked rice and see if it is soft, then grill it. Wait for the fish and cooked rice and we will enjoy it.

“Primitive skills” invites everyone to enjoy.

Thanks to everyone who has read the entire article on “Primitive Skills“. Wishing everyone happy reading. 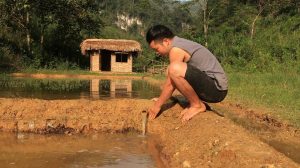